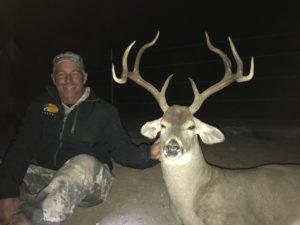 Every year my brother, cousin and I hunt in Mexico. I got the bug to hunt the brush country years ago in South Texas when I was 16. For the last 20 years we have been blessed to go to the brush country of Mexico, where the land is big and beautiful and the deer plentiful. This year while hunting there I killed a really unique buck. It was an afternoon hunt and I saw the deer at about 600 yards, just go through an opening. I use a spotting scope and was lucky enough to get a good look through the scope. All I knew was it was big and really different. The deer worked his way my way for most of the afternoon and about 30 minutes before dark I saw him come out of a brush clump coming right at me. It was a very windy afternoon and though I had a shot at about 250 yards I didn’t want to risk the shot. The deer was walking and started going away from me. I thought I had blown my chance and grabbed my rattling horns. I hit them together for about 20-30 seconds and couldn’t see any sign of the deer. I started glassing and all of the sudden there he was, 80 yards away. He had come on a dead run to get where he did, but the brush was thick. He looked at a doe that happened to be right near me and I grabbed my gun and made the shot. It is truly one of my most memorable hunts. We had never seen this deer, but a cowboy on the ranch had found one of his sheds. We actually thought the way it grew was probably from him banging his antlers on something as it was growing. But the shed matched up exactly to the antlers. They just grew naturally that way. Amazing. The deer aged at 6.5 years old.

2020 Bassmaster Angler of the Year It is hard to put in to words how it feels to have the greatest accomplishment of my career occur in the context of the most chaotic year of my life, and I imagine many of yours too – 2020. But in the midst of all the chaos, my job, while disrupted for a few months, resumed after a few months thanks to the efforts made by B.A.S.S to provide a full season for us. I am so appreciative to them and my fellow anglers for pulling together to make this happen. And … END_OF_DOCUMENT_TOKEN_TO_BE_REPLACED