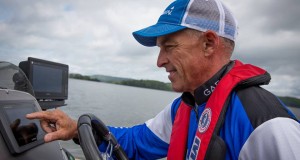 As we all know, bass fishing has its ups and downs. Those once-in-a-lifetime days on water are just that because there are so many different variables that need to be lined up just right. However, when it comes to the summer/fall transition, sometimes it can feel like you’re not doing anything right, but you aren’t alone. Fishing this time of year is downright tough just about anywhere you go.

Back home in Texas, the fish start moving to deep water at the beginning of June, and throughout July the fishing stays pretty good. As time goes on, the water quality will play a big part in the bite. In August, things get flat out tough because the water quality down deep isn’t very good, so you’ll start to see some fish moving shallower and towards the backs of creeks as early as mid-August. That’s when they begin the transition, but in August and September, it’s still flat out hot in Texas.

We will see the fall transition happening all the way into October. You will have the opportunity to catch some very good fish this time of year, but as those fish start transitioning to the backs of creeks, you will notice that the baitfish will be pretty small, so you’ll want to fish with small crankbaits and small topwater baits. Also try fishing around creek channels, but stick with shallower running baits, instead of the deep plugs like you would typically throw in June and July.

There’s still a lot of schooling action that happens in late summer/early fall, so pay attention to what’s going on. You can get on some really good schooling fish early in the morning, so make sure to have a topwater bait tied on.

2020 Bassmaster Angler of the Year It is hard to put in to words how it feels to have the greatest accomplishment of my career occur in the context of the most chaotic year of my life, and I imagine many of yours too – 2020. But in the midst of all the chaos, my job, while disrupted for a few months, resumed after a few months thanks to the efforts made by B.A.S.S to provide a full season for us. I am so appreciative to them and my fellow anglers for pulling together to make this happen. And … END_OF_DOCUMENT_TOKEN_TO_BE_REPLACED