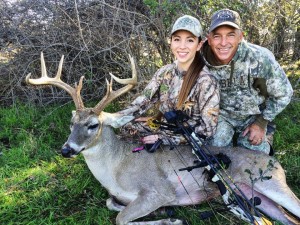 At the end of last year’s hunting season, I decided to get my girls bows for Christmas. After hearing great testimonials about the Cabela’s Instigator and having a couple of friends who had that bow, the Instigator seemed like the perfect bow for them. When we went in to Cabela’s to have the bows set up, the outfitters were extremely helpful and even spent a little time with them on the range working on their form. With both girls in college and my schedule pretty full, I knew there would not be time for me to hunt with both girls, so we focused this year on trying to get a deer for Emily.
The Instigator bow has a big range and can be adjusted from 30-65 pounds. Emily started at around 40 pounds but with a little practice got up to 50 pounds pretty quickly. So that part of the hunt was no big deal. The challenge came from trying to get a shot at a big buck. The hunt started in October and Emily, being a senior at Texas A&M, didn’t have a lot of time to hunt. The first weekend we tried, she saw a nice mature buck and almost got a shot, but there were other deer around and just as she was about to draw, they all took off. Then the rains came, and every weekend she was able to come, it rained …. and rained! We hunted in it, but it was so bad the deer didn’t even move.

Finally we came down to the last weekend she had a chance to hunt. Three hunts or end the season empty handed, but we finally got a break. The weather was great, and with all the rain our oat fields are really awesome this year. We hunted a ground blind and had a perfect wind. Then the deer started piling into the field. There were several mature bucks but one had double brow tines and was really cool looking. My brother Scott was our camera man and tried to talk her into shooting a doe, but she said no I’m waiting to get a shot at the double brow tine. None of us thought it was going to happen. I had a limb in my way, so I couldn’t even see the deer. She asked Scott if he had the deer in the camera and drew. My heart was racing and when she let the arrow go I heard a loud whack. I stood up immediately just in time to see the deer running out of the field with an arrow sticking almost all the way out its right side. She almost had a clean pass through at 25 yards.

We didn’t have much light so we hurried to the spot where the deer left the field, and we could see it just on the other side of the brush line. She could not contain her excitement, and as we approached it, she couldn’t really believe she had done it. But she did! She showed great perseverance and determination to get the deer she wanted, was a great hunter throughout, and ended up making a perfect shot. Truly it was WAY better than if I had shot it. I’m really proud of her. What a hunt!!

2020 Bassmaster Angler of the Year It is hard to put in to words how it feels to have the greatest accomplishment of my career occur in the context of the most chaotic year of my life, and I imagine many of yours too – 2020. But in the midst of all the chaos, my job, while disrupted for a few months, resumed after a few months thanks to the efforts made by B.A.S.S to provide a full season for us. I am so appreciative to them and my fellow anglers for pulling together to make this happen. And … END_OF_DOCUMENT_TOKEN_TO_BE_REPLACED