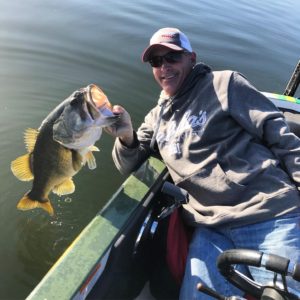 The most recent FLW Tour event was on the Harris Chain of lakes out of Leesburg, Florida.  To be honest, I haven’t ever fished it before and really had not heard that many good things about it.  It ended up being a great place to fish though.  I caught some giants in practice including a nine one day and a ten another.  Those fish came on a Strike King KVD 1.5.  The tournament went well for me. I finished 11th, just ounces out of the top ten cut.  I had two different patterns going.  I caught my fish on a shallow crankbait over grass and also on a ½ ounce Strike King Red Eye Shad, gold with black back.  My other pattern was flipping shallow pads and reeds in three to five feet of water with a Srike King Cut-R-Worm.   I would look forward to goin there again.  It’s a great fishery.  Next stop on the tour is Lake Cumberland Kentucky, and I’m ready to get it going!

2020 Bassmaster Angler of the Year It is hard to put in to words how it feels to have the greatest accomplishment of my career occur in the context of the most chaotic year of my life, and I imagine many of yours too – 2020. But in the midst of all the chaos, my job, while disrupted for a few months, resumed after a few months thanks to the efforts made by B.A.S.S to provide a full season for us. I am so appreciative to them and my fellow anglers for pulling together to make this happen. And … END_OF_DOCUMENT_TOKEN_TO_BE_REPLACED