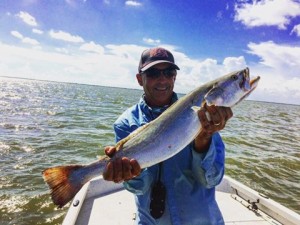 One of my favorite places to go in all of Texas is Matagorda. Since I was 7 or 8 years old, every summer my family took a trip to Matagorda beach.  And since we’ve had our own families, my brother and I have continued the tradition.  As avid fishermen even then, my brother and I always tried to catch fish in the surf, but in recent years we graduated to the bay and eventually figured out a pretty good strategy for catching some nice reds and trout in the bay.  The only problem is we didn’t have a boat, so we took many a “jungle trek” (as my father-in-law calls it) into the bay to hunt and catch.  This year was different though.  I was able to take out the new Ranger P190 to film a show for Fishing and Hunting Texas.  After all those years of wade fishing, I had always wanted to see what the whole bay was like, and man, was I impressed.  Not long after being out there, I caught (and released) a giant speckled trout that measured 28” long.  We also caught a number of redfish, including some that were tailing.  All in all, we had a great trip.  If you’re thinking of taking a trip to the beach and you want to make fishing a part of the trip, consider Matagorda.  It’s a great place on the Texas coast.

2020 Bassmaster Angler of the Year It is hard to put in to words how it feels to have the greatest accomplishment of my career occur in the context of the most chaotic year of my life, and I imagine many of yours too – 2020. But in the midst of all the chaos, my job, while disrupted for a few months, resumed after a few months thanks to the efforts made by B.A.S.S to provide a full season for us. I am so appreciative to them and my fellow anglers for pulling together to make this happen. And … END_OF_DOCUMENT_TOKEN_TO_BE_REPLACED