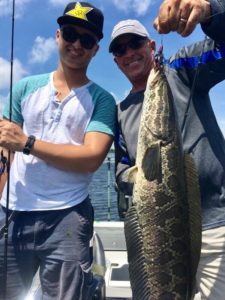 If you hear anything about fishing at the Potomac River, one thing you’ll probably hear about is snakeheads. They’re an extremely bizarre fish that are considered invasive by both the Maryland and Virginia Departments of Natural Resources. It is actually illegal to have them in your boat alive, and they ask that you terminate any you catch. The fear is that with their extremely prolific bi annual spawns and their aggressive nature, they will overtake the fishery, overtaking other species – bass, catfish, bluegill etc. We actually saw boats on the water designed to bow fish for them because they are a very good eating fish. A few buddies of mine had some and said it was great. I caught this one on a Strike King Buzz Bait. It probably weighed 8 pounds. It was a fun fight.

2020 Bassmaster Angler of the Year It is hard to put in to words how it feels to have the greatest accomplishment of my career occur in the context of the most chaotic year of my life, and I imagine many of yours too – 2020. But in the midst of all the chaos, my job, while disrupted for a few months, resumed after a few months thanks to the efforts made by B.A.S.S to provide a full season for us. I am so appreciative to them and my fellow anglers for pulling together to make this happen. And … END_OF_DOCUMENT_TOKEN_TO_BE_REPLACED