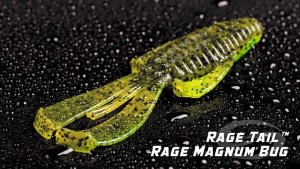 As usual Strike King released a number of new and exciting products at the 2016 ICast show in Orlando, FL.  Several of them really caught my eye.  First, the Poppin’ Perch.  It’s a bait that has been a long time in coming.  One of the best fishermen in Texas, Todd Castledine, who can fish a frog for big bites as well as anyone in the country, has partnered with Strike King to develop this bait.  It’s the easiest Frog I’ve ever tried to walk, and it also spits really well.  This bait is going to catch a lot of big fish all over the country.  Another new bait I’m really excited about is the Rage Swimmer.  It’s a round-bodied ribbed swimbait that has a big tail kick.  There are two sizes – 3.75” and 4.75”.  Fished on a jig head they are going to get a lot of bites.  Not to be outdone, Strike King has taken their incredible flipping bait, the Rage Bug, and produced a little bigger model, the Magnum Rage Bug.  I think when you’re really fishing for big bites, this compact bait will fit the bill.

2020 Bassmaster Angler of the Year It is hard to put in to words how it feels to have the greatest accomplishment of my career occur in the context of the most chaotic year of my life, and I imagine many of yours too – 2020. But in the midst of all the chaos, my job, while disrupted for a few months, resumed after a few months thanks to the efforts made by B.A.S.S to provide a full season for us. I am so appreciative to them and my fellow anglers for pulling together to make this happen. And … END_OF_DOCUMENT_TOKEN_TO_BE_REPLACED