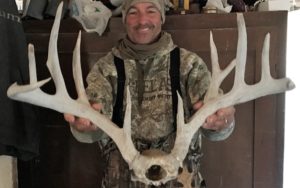 This was not the end of the story for this deer.  Far from it!  Fast forward another year – the Mexico giant is 6 ½, and we are actively hunting him.  I saw him one time at the end of the year.  It had broken off almost all of its points but had one 13” tine remaining.  The deer had a very distinct color, so I knew it was the same deer.  Then at 7 ½, we got a scouting picture of the deer before the season.  Three pictures.  An absolute giant – easily over 170 and might could have even scored 180.  But we never saw the deer in person that year.  Then, at 8 ½, I saw it one time, probably a mile away.  No doubt, it was the right deer – gigantic, but I had no way to get close enough for a shot.  The next year, when the deer was 9 ½, he eluded us during the season but we got some trail camera pictures of him after the season, and he was probably right at 170.  Then the following year, when the deer was 10 ½, we once again failed to see him at all during the season, and we concluded he was probably dead.  We did, however, find his shed in April.  Again, no doubt about it.  It was the same deer.  Then again, the year he would have been 11 ½ we never saw him nor did we find any evidence of him – no scouting pictures, no sheds.

This year, the deer would have been 12 ½, and while looking for another deer my brother had shot, we stumbled across this monarch.  The antlers were totally preserved and absolutely enormous.  We concluded that he had died some time between September and January when he was 11 ½ years old.  Following this free ranging Mexican monster’s progress over seven years was an awesome and instructive experience.  It affirmed our philosophy that allowing giants to grow old and breed is an important factor in improving the herd.  We definitely have a lot more good looking young ten pointers in that general area than we did seven years ago.  No doubt, this Goliath positively genetically influenced the herd.  And he got the last laugh.  We hunted his area extremely hard, and he died right under our noses.  So was letting this monster go at 5 ½ the right thing to do?  Absolutely!

2020 Bassmaster Angler of the Year It is hard to put in to words how it feels to have the greatest accomplishment of my career occur in the context of the most chaotic year of my life, and I imagine many of yours too – 2020. But in the midst of all the chaos, my job, while disrupted for a few months, resumed after a few months thanks to the efforts made by B.A.S.S to provide a full season for us. I am so appreciative to them and my fellow anglers for pulling together to make this happen. And … END_OF_DOCUMENT_TOKEN_TO_BE_REPLACED