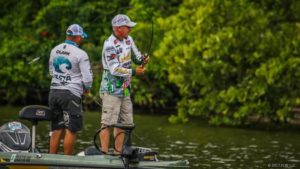 We are traveling home from the FLW Tour stop #7 on the Potomac River in Maryland. The Potomac River is one of my favorite places in the country to fish. After three days of practice, the biggest concentration of fish I found was in a giant grass bed near Mattawoman Creek. The area had a ton of bass in it, and I knew it would be fairly crowded, but I had no idea the number of boats that would fish it. The first day, there were at least 20 boats in there, and everyone was catching fish. I ripped ‘em, and weighed in 19-11oz., and left that main area by 1:00. The second day, the boats were a little more concentrated, and there were a few more of them. The heavy pressure made fishing a lot tougher, and I only managed 11 pounds. That area still produced some nice strings on day two, I just couldn’t get any bigger bites – caught a lot, just not big ones. In hind sight, I wish I had left that area mid-morning and hunted for some less pressured areas. Lesson learned. I will definitely look forward to the next opportunity to fish that amazing river.

2020 Bassmaster Angler of the Year It is hard to put in to words how it feels to have the greatest accomplishment of my career occur in the context of the most chaotic year of my life, and I imagine many of yours too – 2020. But in the midst of all the chaos, my job, while disrupted for a few months, resumed after a few months thanks to the efforts made by B.A.S.S to provide a full season for us. I am so appreciative to them and my fellow anglers for pulling together to make this happen. And … END_OF_DOCUMENT_TOKEN_TO_BE_REPLACED