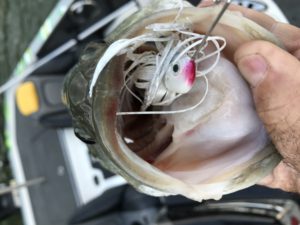 What probably used to be the most used lure in any tackle box was the spinnerbait. In the day of swim baits and vibrating jigs, the spinnerbait is often totally overlooked, but there are many situations in which it is still the best bait.  The spinnerbait shown here is a Hack Attack Heavy Cover Spinnerbait.  The one feature the spinnerbait has that many of these imitations do not is its ability to come through cover reeled very slowly, which can be especially important in the colder months of the year.  Take last year, for example.  Jason Christie was leading the Bassmaster’s Classic going into the last day, and was the only person in the field relying on a spinnerbait.  His comment was that he could keep the bait in the strike zone longer.  I think we often overlook the importance of this.  Though I also don’t throw a spinnerbait as much as I used to, but there are times when it is undoubtedly the best bait.

2020 Bassmaster Angler of the Year It is hard to put in to words how it feels to have the greatest accomplishment of my career occur in the context of the most chaotic year of my life, and I imagine many of yours too – 2020. But in the midst of all the chaos, my job, while disrupted for a few months, resumed after a few months thanks to the efforts made by B.A.S.S to provide a full season for us. I am so appreciative to them and my fellow anglers for pulling together to make this happen. And … END_OF_DOCUMENT_TOKEN_TO_BE_REPLACED