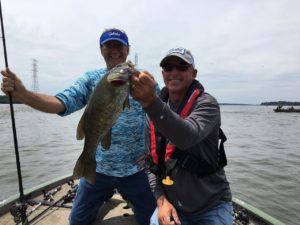 In all the tournaments I’ve fished on the Tennessee River, I have never fished the tail race below the dams. So the other day while in Florence, Alabama at the Cabela’s Collegiate Bass Fishing Championship, Wade and I decided to try the Wheeler Dam tail race on the upper end of Wilson Lake. The amazing thing was the variety of fish we caught – from drum to catfish to white bass to black bass to small mouth. The cool thing was that we got so many bites in the current. Though we didn’t catch a whole lot of bass, the drum were biting extremely well, and we could have caught them all day long – lots of five to eight pounders. The white bass were literally every cast, and if that’s what we had been targeting, we could have filled the boat with them. If there had been a bass tournament there, I don’t think that’s where I would have wanted to fish. The bass we caught were scattered, though we did catch some nice ones. But it was cool to see what the tail race was all about

2020 Bassmaster Angler of the Year It is hard to put in to words how it feels to have the greatest accomplishment of my career occur in the context of the most chaotic year of my life, and I imagine many of yours too – 2020. But in the midst of all the chaos, my job, while disrupted for a few months, resumed after a few months thanks to the efforts made by B.A.S.S to provide a full season for us. I am so appreciative to them and my fellow anglers for pulling together to make this happen. And … END_OF_DOCUMENT_TOKEN_TO_BE_REPLACED